Ants make complex, fascinating decisions—how do they do this with tiny brains? 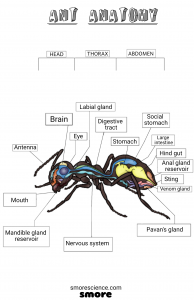 When we ask about intelligence for any organism, we must consider what intelligence means. We can’t even answer this for humans! Is it scoring a perfect 2400 on the SAT? Or is it being able to remember a dance the first time someone teaches it to you?

As challenging as it is to even begin to describe human intelligence, describing animal intelligence is even harder! At least we can experience a human brain; putting yourself into the shoes of a monkey, dolphin, or ant is very difficult.

That said, we do know that ants can solve very complex problems, such as the traveling salesman problem. Imagine you are a comic book salesman that has to visit fifteen houses, which are spread all across the city. You need to visit each house exactly once. How can you map the shortest possible route?

Ants solve this problem as a colony! When provided with food sources—which represent the houses you visit in the traveling salesman problem—they find the shortest distance between them. In fact, they’re so good at this that they mimic computer algorithms that make the same predictions!

Ants, like crows and dolphins, seem to use tools. Honey is a high-value food, rich in sugars, but difficult to transport. When provided bits of sponge and tissue, they used the objects to soak up honey and bring it back to their nests.

Research shows that ants are very smart! Most animals who solve complex problems also possess large brains, so how do ants get around without one?

A nervous system is what helps all animals make decisions, sense their environments, and move around. The basis of a nervous system is nerves, or nerve cells. Nerve cells are usually long, thin, and interconnected. Information moves through them in the form of electricity. Bodies are made of millions of circuits, each transmitting information constantly to ensure we can live, breathe, and eat.

Ant brains are divided into many small bits, known as ganglia. Each ganglia acts like a mini data processor.  Each ganglion is responsible for controlling something, like one pair of legs, or one set of wings, or receiving signals from one antenna. Ganglia are also connected to each other.

Because the system is broken into so many little bits, they can function on their own. You may have seen headless insects, including ants, still twitching. This is because the ganglia controlling the legs aren’t damaged. The ganglia near the legs also can’t send signals back up to tell the brain that something is wrong!

It may seem weird to us, but it seems to work for ants. There are almost 16,000 ant species around the world, and  5 million insect species!

Do ants have small brains?

How do they do so much with such small brains? One reason is these ganglia. Ants, like other insects, have ganglia scattered throughout their bodies. Each ganglion is responsible for controlling something, like one pair of legs or one set of wings, or receiving signals from one antenna. When the work of running the whole body is shared, the brain itself has much less work to do. This means the brain can be a lot smaller in the ant, proportionally, than it is in other animals.

It’s also important to note that all the amazing behaviors we spoke about are not performed by individual ants, but are collective behaviors of the entire colony

How do ants work together?

Some researchers believe that ant colonies are so well developed and interconnected that they behave as one organism, or one “superorganism”. Ants are social. They live, work, and forage together in large groups known as colonies.

Human bodies are divided into organs. Our heart pumps blood, our brain makes decisions, and our stomach digests food. Just like each body part doesn’t do every single task, each ant in the colony doesn’t do every task. Ant queens are responsible for reproducing, while workers build and maintain the nest and gather food. As the cells in our bodies are all related, all the members of an ant colony are related. The queen is the mother, and all workers are sisters. This is a biological concept known as division of labor.

Teamwork is what allows ants to make decisions. When foraging for food, each ant goes on its own journey. If it finds food, it lays down a trail of chemicals known as pheromones. The next ant smells the trail and takes the shortest path to follow it. With a thousand paths, the ants eventually find the shortest route. This process solves the traveling salesman problem through sheer numbers!

Ant colonies perform a lot of tasks in a similar way. In short, having thousands of brains is much better than having one. With more information, ants make better decisions. Even though ants have tiny brains, a colony has a thousand tiny brains—more than enough to rival one puny human brain!

Colony: A group of insects that live, nest, and forage together. They are often genetically related.

Division of labor: Splitting tasks to be performed by different individuals or different groups

Pheromone: A chemical that an animal releases into the environment that affects the behavior of other animals of their species

Ant Anatomy in a poster. You can download the poster here.