Here are 12 easy constellations to find next time that you are out stargazing. For this blog, we have picked 12 major constellations from both Northern and Southern hemispheres. Ursa Major, Centaurus, Cassiopeia,  Crux, Orion, Carina, Canis Major, Ursa Minor, Gemini, Taurus, Auriga, and Scorpius. 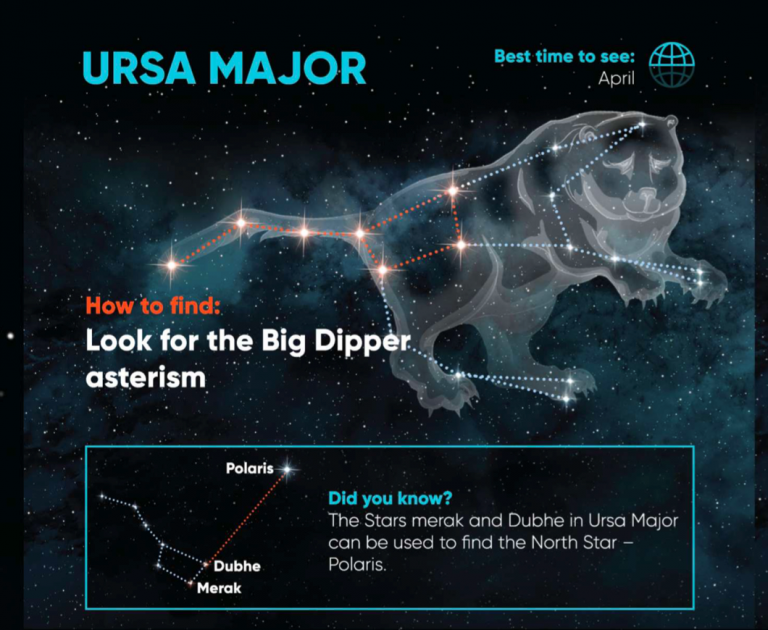 The best way to locate Ursa Major is to look for the Big Dipper asterism. This is predominantly the most easily recognizable constellation, that looks like a large spoon or perhaps a wheelbarrow.

Ursa Major is the third largest constellation in the sky, dominating an area of 1280 square degrees.

Ursa Major constellation is visible round the year from most of the northern hemisphere and appears circumpolar over and above the mid-northern latitudes. From southern temperate latitudes, the main big dipper asterism is invisible, but the southern parts of the constellation can still be visible. 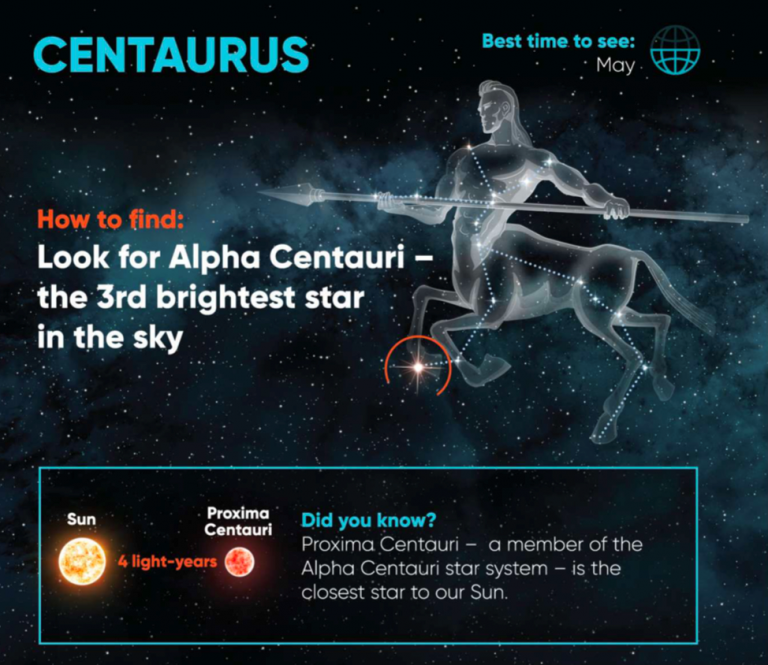 Centaurus is the ninth largest constellation seen in the sky, dominating an area of 1060 square degrees. It contains eleven stars with known planets.

Beta Centauri, the second brightest star in Centaurus, is the tenth brightest in the night sky.

All in all, Centaurus contains eight named stars. 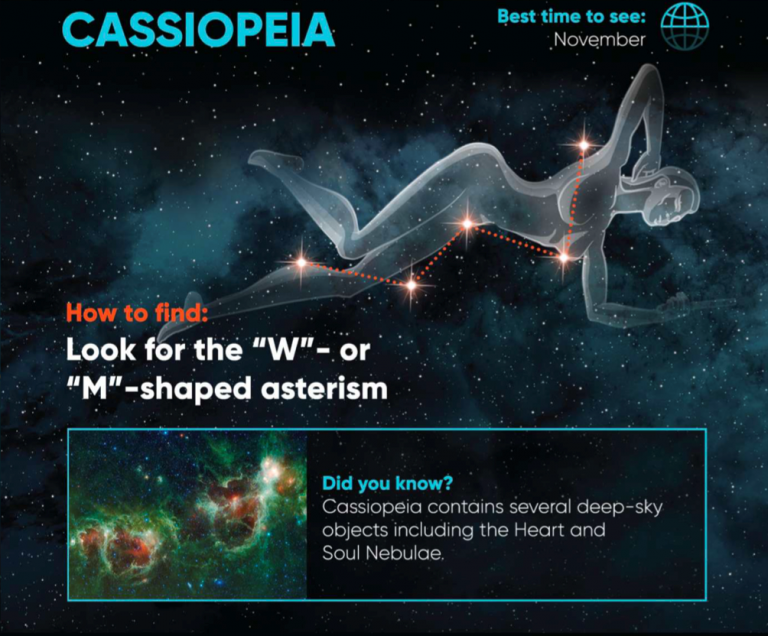 Cassiopeia is easily recognizable for the prominent W asterism formed by its five brightest stars. Spotted in the northern sky, the constellation is named after Cassiopeia, the vain and boastful queen in Greek mythology. 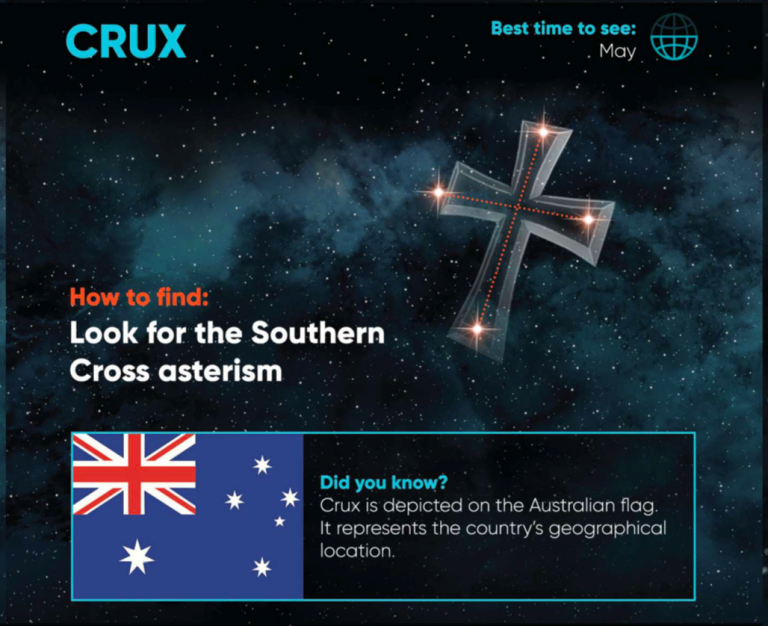 The Crux is one most easily distinguished constellations. Centered on four stars in the southern sky it fills in a bright portion of the Milky Way. It is, however, the smallest of 88 constellations occupying an area of only about 68 square degrees.

The Crux is one of the easy constellations to find for its predominant cross-shaped asterism, the Southern Cross, formed by its five brightest stars.

It contains six named stars, the brightest star in the constellation is Acrux, Alpha Crucis. 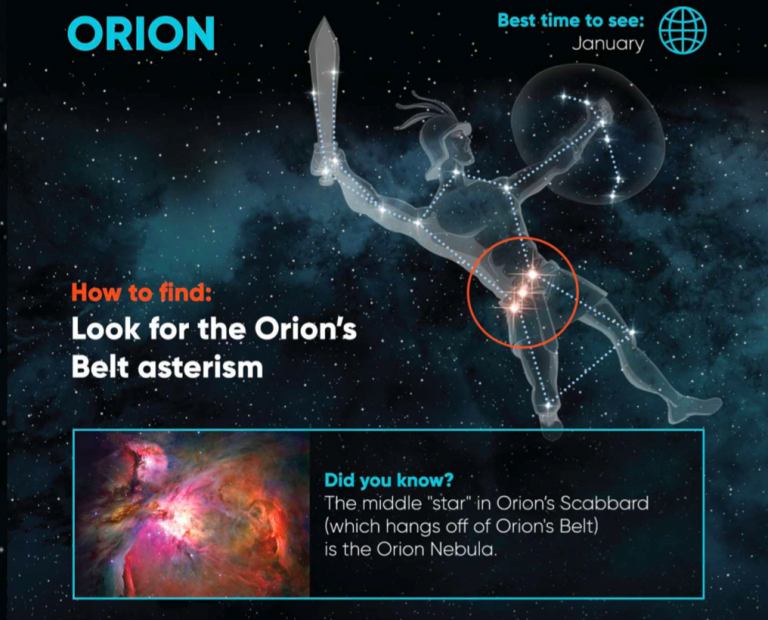 Orion is one of the highly recognized constellations, is visible high in the night sky through the year.

In the center is Orion’s “belt” comprising of three bright blue stars.

The Orion Nebula is in his “sword” right below the belt, just visible to unaided eyes in very clear, dark, blue skies. 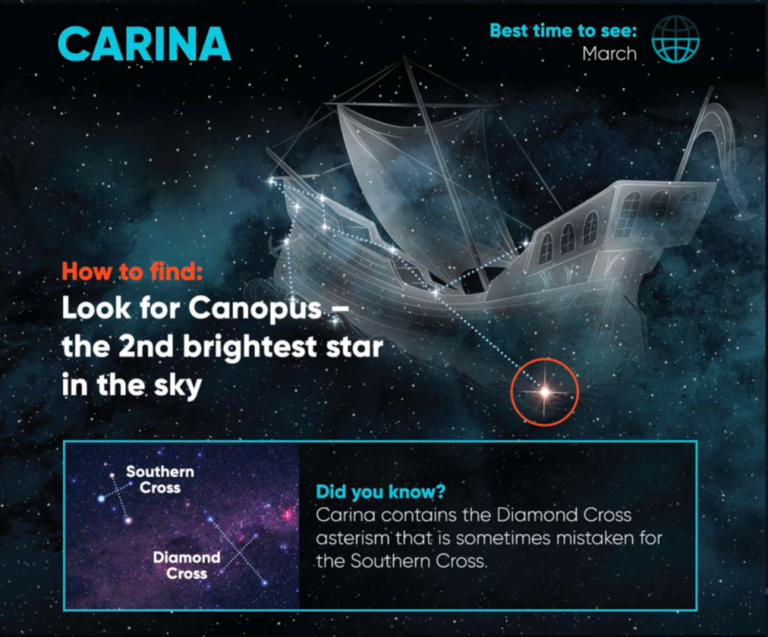 Carina constellation is located in the southern skies. The name means “the keel”, keel of a ship, in Latin.

This is the 34th largest constellation in the sky, filling up an area of 494 square degrees.

Carina is composed of 11 stars (five are named) with known planets and contains no messier objects. The brightest star in the constellation is Canopus, Alpha Carinae.

This constellation was originally a part of the much larger Argo Navis, which represented the ship Argo. 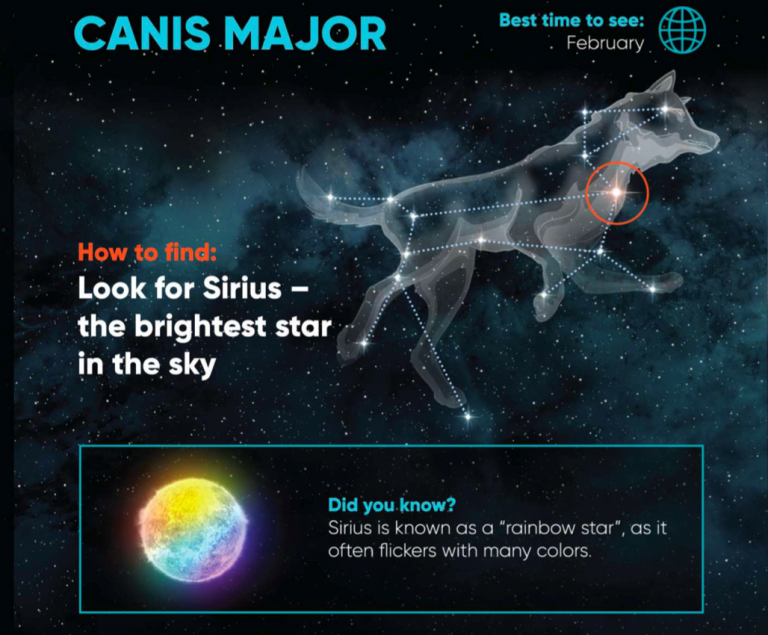 Canis Major is a constellation to be looked for in the southern skies. Its name means “the greater dog” in Latin.

Canis Major has Sirius, the brightest star in the sky, as well as several other notable deep sky objects.

Canis Major is the 43rd biggest constellation in the sky and occupies an area of 380 square degrees.

8. Ursa Minor - Best time to see: All through the year, preferably July

Ursa Minor, also known as the little bear, consists of an asterism called the Little Dipper. Polaris, or the North Star, is the last star of the little dipper. Polaris is a star in the celestial north pole, so it does not change its position all through the year. Sailors use it like a GPS in celestial navigation. Polaris is not bright enough to spot directly, but can be tracked with the help of Ursa Major.

Gemini is a relatively obscure constellation compared to Orion which is easily identifiable. Gemini is sandwiched between Orion and Taurus, to the left side of Orion. The brightest stars of Gemini are Castor and Pollux, which form the heads of the twins. The constellation can be traced from Orion’s belt in a leftward direction.

Taurus is fixed to the right of Orion. You’ll need to locate Orion’s belt, from which an imaginary straight line can be traced upwards and to the right. Your eyes will land on the brightest star of Taurus, Aldebaran, which forms the base of the right horn of Taurus.

Auriga is a pentagon-shaped winter constellation of the northern hemisphere, and the brightest star of Auriga is Capella. The constellation Taurus is connected to Auriga.

The Scorpius constellation lies in the southern sky and is easy to find because of its proximity to the Milky Way. The brightest star is Antares, and it is red. Scorpius is shaped like the letter J, curved at the rear to give the shape of a scorpion tail.

Major Constellations in the Northern and Southern Hemisphere (Grouped by Season)

Hopefully, this little introduction has been helpful to gain some reference for “star gazing” and “starry knowledge”. Be sure to download the poster and enjoy learning about constellations and how to connect the twinkling stars next time you go out for a night walk. 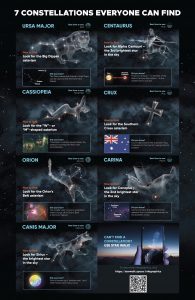 Constellation poster, featured in our Fall 2021 issue of Smore, is available for free download here.