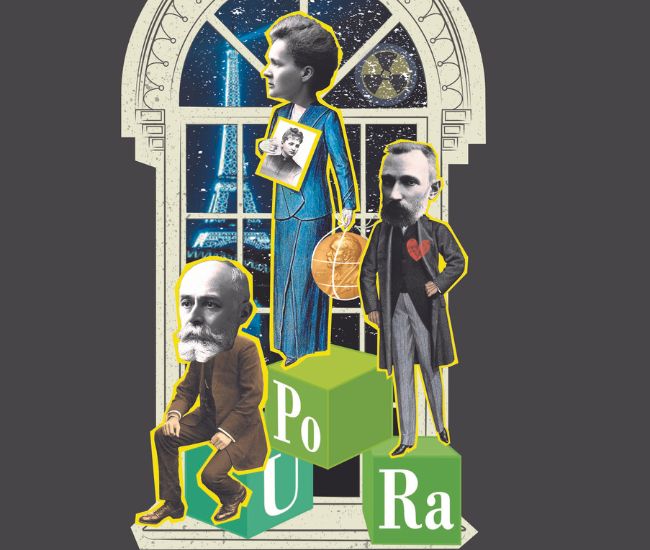 In 1883, sisters Maria and Bronisława Skłodowska were living together in Warsaw, Poland. Both were studying at the “Flying University” – a secret underground school where women who were prevented from attending real universities could go to learn science. They dreamed of being scientists, but they worried about being able to afford it.

The sisters had come up with their plan as teenagers. Maria would keep her head down and work hard to send money for her older sister to study in Paris. Later it would be Maria’s turn to follow and study.

Maria was finally able to enroll in the University of Paris in 1891. She studied physics, chemistry, and mathematics. She also started going by the name “Marie.” But things started to get really tough. At times, Marie was so poor that she survived only on buttered bread and tea. The attic she rented was so cold that she had to wear all of her clothes at the same time. But she did it – she finished with not one, but two degrees in 1894.

The following year, Marie met the scientist Pierre Curie. Marie fell in love and the couple married. Although they kept their projects separate, they helped each other with experiments.

In another lab, French physicist Henri Becquerel was working on phosphorescence. He noticed that certain objects would glow in the dark for a short time after being exposed to light (like the plastic stars you might stick to your bedroom ceiling). In his experiments, Henri exposed materials to sunlight and then put them on photographic plates. When he developed the plates with chemicals, he could see the marks the materials left behind. One of the materials from his experiments was uranium.

Henri thought the image the uranium left on the plates was a result of light that had been absorbed and then emitted. But after trying his experiment with uranium that had not exposed to sunlight, he found that it would work even in total darkness. He realized that even if uranium absorbed rays from the sun, there had to be rays coming from the uranium itself.

The scientific community wasn’t very interested in Henri’s work, but Marie was. She was excited and wanted to learn more about the uranium rays. The director of the Paris Municipal School of Industrial Physics and Chemistry allowed her to conduct experiments, but she had to use a damp storeroom. (If this sounds familiar, that’s because the same thing happened to Lize Meitner around this time. Apparently quite a few of greatest minds of the 18th and 19th centuries were banished to storerooms, because they were women).

Marie needed a device that could measure electrical waves in the air, which would provide evidence that invisible waves may be passing through. Using a device invented by her husband and his brother, Marie found that uranium emitted these electrical waves. She also found it was true whether the uranium was solid, ground up into a powder, pure, mixed with other things, wet, dry, in the dark, or in the light.

Scientists at the time believed atoms were the absolute smallest particle in existence. Subatomic things like neutrons and electrons weren’t in people’s minds yet. But Marie Curie had a hypothesis about why uranium behaved the same in any condition. She thought something must be built in the structure of atoms themselves.

Marie Curie set herself a mammoth task. She planned to test how well a huge variety of elements could conduct electricity, and if any of them did it like uranium. In April 1898, she had her results. A group of metals all showed the same behavior. She invented a new word to describe the phenomenon – radioactivity. She also discovered two new radioactive elements: polonium and radium.

Marie Curie, Pierre Curie, and Henri Becquerel won a Nobel prize for their work. And Marie didn’t stop there! She later earned another Nobel prize in a different area of science altogether – a feat no one else has managed to repeat.

Unfortunately, radiation can be very damaging to the body. Marie’s incredible work ultimately led to her dying quite young. Her research lives on in almost every field of science, from determining the age of rocks to treating diseases to generating massive amounts of power. Few lives have not been touched by the work of Marie Curie.

Photographic plate: a sheet that was used before the invention of photographic film

Conductivity: the ability of a material to conduct electricity

Radiation: the emission of energy as waves of particles

The article was originally published in Smore Magazine Issue 2019. Purchase this issue here.