Dr. Leana Wen has dedicated her career to getting people the help they need – whether treating patients as an emergency room physician, teaching as a professor, or communicating with the public through newspapers and television.

Leana is passionate about the importance of public health, but she knows that serving health is about much more than what happens in the four walls of a hospital. And while she always enjoyed science, it was getting people the help they need – no matter who they were – that drew her to the world of medicine.

When Leana was ten years old, she enjoyed school –everything from history and writing to science and math. But it was an experience at home that shaped her vision for the future. Leana had suffered her whole life from severe asthma, even ending up in the hospital when attacks became too much. She knew what it felt like not to be able to breathe. She looked up to the doctors who were always there to help her when she needed it most.

That’s why it was so shocking when her young neighbor – a kid like her – had an asthma attack. His family was undocumented and, because they were afraid of what might happen if they went to the hospital, didn’t go to the emergency room. The young boy didn’t get the help he needed and Leana was there when he passed away. Leana knew from that moment that she wanted to be a doctor. Even more, she knew she never wanted to have to turn away anyone in need of help. For any reason. Ever.

But Leana didn’t tell anyone about her hope of becoming a doctor. To her, it seemed impossible. She didn’t even know where to start. “Growing up I didn’t know any doctors other than my pediatrician.” Leana said. “I literally didn’t know what the path was to become a doctor.” She kept it in her mind.

A few years later, when Leana was 13, she was looking for ways to earn some money. She didn’t want to sacrifice her education, so she was excited to learn about a special program at California State University, Los Angeles. The program allowed younger students to test in and start classes early – all while being part of a work study program. Leana tested out of all that she could. She ended up with enough credits to skip all of high school and start college at age 13.

Though she had no idea how to become a doctor, she knew a family whose daughter had become a lab technician. That seemed like something she could do. She picked a major in biochemistry. Even though she enjoyed her classes, she was still too embarrassed to tell anyone about her dream of becoming a doctor. “I thought they would laugh,” Leana said.

Finally, she told the head of the work study program. Instead of laughing, he connected her with former work study students who had gone on to medical school. Everything changed. Not only did she have a roadmap, but she had access to people with backgrounds like hers who had already taken the journey.

She learned about test prep for the MCATs and getting clinical experiences with doctors. For the first time, she knew what she needed to access and how to access it. “Talent is universal,” she realized, “but opportunity is not.”

Talent is universal, but opportunity is not.

Leana started in an MD/PhD program – one that involved work in a research lab – because those were the only programs that paid for full tuition. She wasn’t a US citizen, and most loan support and forgiveness programs weren’t available to her. She said that she could not imagine taking on the medical school loans at the time. If that had been the only option, then Leana doesn’t believe she would have gone to medical school.

She enjoyed the research and the lab work, but she kept being drawn to the social issues behind the medical emergencies they were being trained to address. If someone lived in a food desert (a place with no easy access to something like a grocery store), it didn’t matter how many times a doctor told a diabetic patient his diet could lead to a coma. There just wouldn’t be any reliable access to other food. Controlling asthma would be next to impossible for a teenager living in a shelter where people smoked. Leana’s passion for addressing these social issues outweighed her enthusiasm for scientific inquiry in the lab. She switched to a program in public health.

Over the years Leana’s career took many turns. After winning a medical school election for the American Medical Student Association, Leana spent a year in Washington, DC as an advocate.

She worked in international health with the World Health Organization in places like Rwanda. Closer to home, her mother’s own misdiagnosis brought her into the world of patient advocacy. Eventually that brought her to George Washington University to start a center for patient-centered care. She even wrote a book on patient advocacy and served as the Health Commissioner for the City of Baltimore.

The more Leana crossed paths with the media, the more she recognized the importance of communicating public health to the public itself. “People want to understand how to navigate their lives, she said. “But public health – when working – is invisible.”

She started another book to introduce everyday people to the important roles of public health in their daily lives. She submitted the book to her publisher just as the COVID-19 pandemic started.

Suddenly, the invisible world of public health became very visible. It dominated our everyday lives and vocabularies. Leana rewrote the entire book. “COVID did not create the health disparities,” Leana said, “but it did unmask them.” She wanted to help people connect the dots and learn about how the issues they were seeing in the news were the consequences of poor long-term investments in public health across the country.

Hopefully the public will be able to push for the important changes we need before public health disappears back into the background. Until then, Leana will keep doing the best she can with the resources she has to make sure everyone can get the help they need, regardless of who they are. 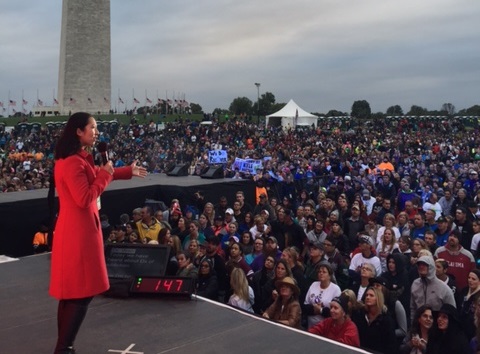 Click here to purchase this issue for a kid who aspires to become a doctor.