Science Like A Girl: Inventor and Author Arlyne Simon

As a Platform Architect, Dr. Arlyne Simon knows that much of what makes the world work can be hard to see. Her years as a keen observer have taken her from biomedical engineer to inventor to entrepreneur to author, and she is keeping her eyes and mind open for whatever might come next.

Arlyne has always been fascinated by the world around her, childhood hobbies swerving to follow her interests. She read. She crocheted. She even learned how to make custom outfits for her doll from old clothes – thanks to the sewing expertise of her mother, grandmother, and great grandmother. “I was an observer more than a nerd,” Arlyne said, “learning that you can be creative in different elements of your life.”

Then came her interest in butterflies. Arlyne loved the variety and colors. She once cared for a particularly vivid caterpillar in a jar on her windowsill. But then the day finally came, the stunning caterpillar transformed into a brown moth. She learned to adjust her expectations. When the time came to think about college, Arlyne opened her eyes again. She liked science, but didn’t picture herself wearing hard hats as a civil engineer like her father. And while she loved her home country of Dominica, going to a four-year college would mean leaving the island. Luckily, she didn’t have to make the decision alone. Arlyne’s father asked, “What should ‘we’ study in college?” She was thankful to feel like part of a team. They settled on chemistry.

She studied for a year at a community college, and the whole family moved to Atlanta, GA so that Arlyne and her brother could go to college in the US. Living at home during college not only helped Arlyne with the transition to a new country, but it gave her a supportive network of people to come home to. When she got a bad grade, her family pointed out that she knew exactly what to study to improve for next time.

When Arlyne’s father heard physics was a struggle, he “happened” to pass a bookstore and buy a book Physics for Dummies for them to work through together. With that support, her interest and skills grew. But Arlyne’s observing ears were still open. When a chemical engineer came to speak at her chemistry club, she ended up hooked. “Chemical engineers could work on anything from cosmetics to pharmacology to automotive,” she said.” It was crazy fascinating” A door to a new world had opened, and Arlyne couldn’t wait to walk through. Taking that next step meant going to graduate school- a big step academically, and Arlyne’s first move away from her family. As part of a program supporting students from underrepresented minorities in pursuing advanced degrees, Arlyne had learned all about writing personal statements and conducting research. She had also been greeted by the all-important voice of the program admin calling her “Future Dr. Simon” every time she walked through the door.

She decided to make that name a reality. After a conversation at a career fair, applications, a campus visit, and a cross-country move, Arlyne was ready to earn her Ph.D. On-campus she faced one more hurdle the qualifying exam. Arlyne passed the essay section, but a lifelong habit of “overthinking” multiple-choice questions held her back. She failed the section twice. The second time she fell short by only one question. Even though Arlyne’s family was states away, their voices were still in her head. Failing just told her what she needed to study for next time. One question wasn’t going to stand in her way of getting a “Dr.” in front of her name. She passed on the third try.

In the lab, Arlyne found a new world of things to observe. She loved bouncing ideas off of her peers learning about microfluids, and trying to determine whether the polymer behaviors her advisor studied could be replicated at microscopic scales. Then a clinician who worked with patients suffering from bone marrow transplant rejection asked whether Arlyne could help. The current approach to diagnosing rejection took many tests. But maybe, just maybe, Arlyne could use her work to create a series of microscopic tests that could look for all of those different factors at once. That conversation not only changed the course of Arlyne’s research, but lead to her first patient, a grant proposal, and eventually a start-up.

Arlyne’s observing ears were open, and she heard voices ranging from doctors to college professors telling her that she could succeed in selling her invention. But being an entrepreneur meant that instead of spending her time listening to customers and crafting products that served them, she was meeting with accountants, renting (lonely) lab space, hiring website designers, and talking to lawyers. She missed the lab, her peers, and her customers. Feeling burnt out and demotivated, Arlyne knew that – this time – she had to listen to herself. Arlyne was happy to be back in the lab for an industry job designing hypodermic syringes. She got to interview nurses about their needs and craft language for updated industry standards. But after a couple of years, she felt her ears and eyes reaching out again.

Arlyne was searching for new opportunities. She received an email from a recruiter that was so unexpected she almost deleted it as spam. But it was real – someone at Intel wanted her to design supercomputers. Arlyne was not convinced that her experience in syringes and assays would translate to supercomputers, but talking to the recruiter changed her mind. They were looking for someone who could observe and think creatively. Specifically , Intel was interested in her ability to speak to people and translate their needs into real , technical specifications. Being the bridge between technical and non-technical people, between abstract ideas and concrete instruments, was something she knew how to do.

“I am problem solver. I am an inventor. I solve big problems, big and small. Because I have great ideas,”

Arlyne learned about heat transfer and started a new adventure. Eventually, she transferred into the healthcare division at Intel, where she feels like her skills and her interests both belong. But finding a place for herself wasn’t enough Arlyne wanted to make sure other girls felt supported, creative, and like they belonged as well. After looking back at a photo of herself with her all-male graduate class, Arlyne decided to write a book. She came up with , and wrote draft after draft about the young girl on a mission to create an unbreakable crayon. Those many drafts were met by just as many rejections. Arlyne saw those rejections as a new opportunity to be creative and build something for herself.

She published the book herself, and has even published a sequel. Arlyne wants more young girls to explore the world around them, even if that means opening the doors herself.

Arlyne made it clear she doesn’t expect every kid who reads her book to end up with a patent, but she wants them to at least know patents exist. Looking back at her own education, she bemoaned how we treat science classes as compared to other subjects. 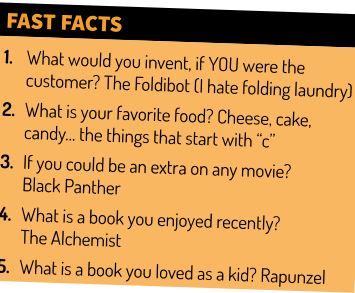 We are perfectly happy encouraging kids in English class even if we don’t think they will become J.K. Rowling, or encouraging kids in art even if they aren’t expected to become Picasso. So why do we cut people off if they aren’t “good enough” at science? Arlyne wants kids to be able to enjoy and explore STEM just for the sake of enjoying the exposure. Let them see what’s on the menu. don’t become scientists, it might set them off on a great adventure in a new direction they wouldn’t have even known was there.

Click here to purchase this issue for a kid who aspires to become an engineer and an inventor.

Check out an interesting article about Arlyne here.