Dr. Jayshree Seth has a passion for searching out problems. As a Corporate Scientist for 3M, she has taken on everything from keeping diapers on wiggly babies to finding the perfect level of stickiness for a roll of packing tape.

Jayshree even has 70 patents hanging on her wall to prove it. And as the 3M Chief Science Advocate, she travels the world to shine spotlights on the huge impact STEM has on our daily lives. But finding her way to these roles – and even to STEM at all – meant learning when to say yes to a challenge, knowing when to say no to an opportunity, and facing moments of self-doubt along the way.

Jayshree grew up around STEM, even wandering the campus of the technical university in India where her father taught. Her own interests were elsewhere. She loved writing and history, looking for and telling the stories behind everything. But her parents had strong expectations that she follow in the family’s footsteps and also become an engineer. Jayshree said cultural and familial expectations motivated her to follow her parents’ wishes, and she applied for the engineering program at the school where her father taught. She didn’t get in.

Jayshree thought this meant she could start looking for other options, other fields she could study. But that moment taught her just how committed her parents were to this path. They looked for other schools where she could study engineering. Jayshree said it was already rare for young women in India to study engineering at the time. Those who did so studied at universities close to home. When Jayshree moved across the country to study engineering at a school far away from her family, it challenged societal expectations. It was a challenge to norms, but it was also a challenge for her personally. New place, new school, new daily life, and new things to study. But she did it, and she did it well.

Jayshree performed well enough in her classes to apply for a Master’s degree. That took her on yet another journey, this time across oceans to Clarkson University in New York. Once again, a new academic challenge was paired with a new life, country, expectations, and even food.

But then something happened. Jayshree was working on her Master’s project, modeling crystal growth in space. She would spend days at the computer making progress, but not seeing the point. She knew she was working on an opportunity that few others ever get to have, but she also knew that she spent her days asking herself, “Gosh, is this really what I want to be doing?”

Her parents’ expectations were important to her, but she couldn’t help staring at the computer screen and wondering what it was all for. She made a decision. She would finish her Master’s, but she would find something else to study next. She wanted to see her work impact the world around her. She found her way to the experimental side of things, studying the plasma deposition of diamond coatings. She certainly wasn’t an expert, having just switched fields, but she was motivated. She could make tools that were more robust and lasted longer, and she could see the results of the work right before her eyes. She had taken on challenges before, but this one she did for herself. She had to convince new colleagues, a new advisor, and her own self-doubt that she could take it on.

She could learn anything if there were interesting problems to be solved.

Taking that first leap led to more. She applied for an internship at 3M, even though the company didn’t typically recruit from her school. She got the internship, and her performance led to a job offer. The job was – once again – completely outside of her field of expertise. But Jayshree knew she had moved away from home, changed continents, and switched fields. She could do this too. She told herself that she knew as much about diapers (the focus of the new job) as she did about diamonds when she started her PhD. She could learn anything if there were interesting problems to be solved. Working on those diapers led to her first patent.

Then 3M offered her a management role. Something in Jayshree’s heart made her hesitate. Once again there were external expectations from colleagues and mentors. People were telling her how great this would be for the company, for her career. But she loved the technical work she was doing. She had young children and was trying to navigate building their dual cultural identities. Experience had told her she could take it on, but something else inside her was asking if she should. Then a colleague asked Jayshree an important question. “What is the right decision for you for now?” Those last two words changed everything. Jayshree already knew this wasn’t the right moment for that particular opportunity. But saying no, for now, didn’t mean saying no forever.

Saying no to that role made it possible for Jayshree to grow and be ready to say yes to other opportunities when the time was right. She never stopped working and developing her skills in the meantime. And when the time came for 3M to create the new role of Chief Science Advocate, they came to Jayshree. She fought off her flicker of self-doubt by reminding herself of all that she had accomplished already, and she said yes.

Now she travels the world sharing STEM with the public and welcoming new generations into the broad array of STEM careers. She started writing about it, and soon her work is being released as the book The Heart of Science. Her book-loving younger self could not be more pleased. Jayshree wants everyone to know that turning down an opportunity does not mean your innate talent and earned skills will vanish. Trust yourself and keep growing in the meantime.

Nowadays Jayshree finds herself overwhelmed with a sense of gratitude for all of the steps and skills that led her here. And she is thankful that her journey took all the jumps and twists it did. Many people describe their careers in terms of ladders or puzzles, climbing up towards a goal or finally fitting the pieces together in the right place. But Jayshree prefers to think of mosaics. Both for her career and for the problems she solves, she values gathering all of the relevant information together and taking a step back. Only with that distance can you see the shape of the mosaic you’ve built. She finds herself asking if she has done enough. Could she do more with the opportunities she has been given? Experience has taught her that she can take on anything, and she is doing her best to focus on her current challenges … for now. 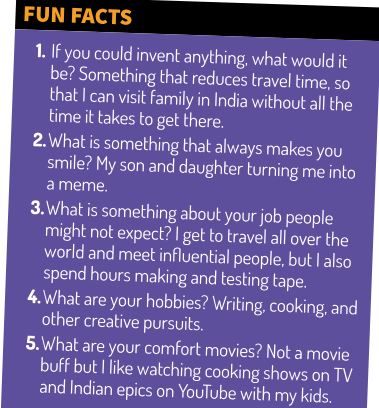 Click here to purchase this issue for a kid who aspires to become a corporate scientist.