Let’s travel back in time to the year 1952. On that fateful day, something extraordinary happened. It was so groundbreaking, so earth-shattering that it completely changed the face of science! What was it, you may ask?

It was none other than a photo. it was called “Photo 51,” to be exact. You may be wondering how a photo could have such a big impact. Well, let’s take it from the beginning. It all started with a young Rosalind Franklin. She grew up in London in a well-to-do family. Rosalind was very clever, but she wasn’t like other girls. at that time, not many girls studied science. Even her father was against it and suggested she become a social worker instead. But Rosalind was not having it. She was a Brainiac when it came to science and was determined to pursue it. She read books on quantum theory, subatomic energy, and group theory. And she conducted her own experiments. Her father eventually saw how passionate she was and allowed Rosalind to go after her dreams. She went on to earn her doctorate in physical chemistry from Cambridge University in 1945.

Rosalind devoted her life to science. Her most awesome achievement was her contribution to the discovery of the double-helix structure of DNA. But Rosalind’s discovery wasn’t so simple. There was a bit of drama that went on. Rosalind was working with her peer, Maurice Wilkins. Tension grew between the two and they were no longer able to work together. So Rosalind went off to work with graduate student Raymond gosling for a while. They eventually took Photo 51. At the time, she didn’t realize its significance. 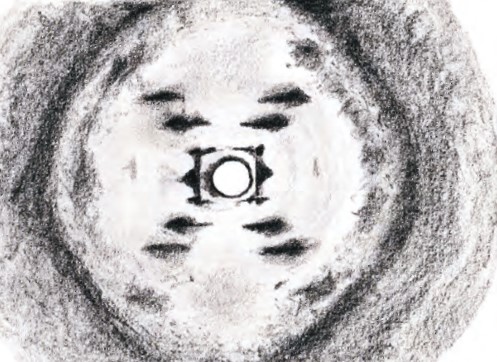 Take a look at Photo 51. It may seem like a bunch of random dots and lines, but there’s more to it than that. Rosalind took a series of photos using a technique called X-ray crystallography to examine DNA molecules. She shot an X-ray beam at the DNA molecules. The beams made interesting designs and patterns. These can be measured with complicated mathematics. The X in the middle was a clue showing the double helix present in DNA.

Meanwhile, Wilkins decided to work with scientists Francis Crick and James Watson. He somehow got a hold of Rosalind’s Photo 51. He showed it to Crick and Watson behind her back. The men stared at the photo. then, Ka-Boom! Major inspirations struck! The photo was a game-changer. It led Watson and Crick to create their famous DNA model which changed the face of science. the pair published their findings in 1953 and received a Nobel Prize in 1962.

DNA stands for deoxyribonucleic acid. Try saying that 3 times with t getting tongue-tied! DNA is in our bodies. It carries all the information about how we look and function. It determines things like eye color and how our lungs work. These details are carried in different sections of DNA called genes. DNA is a long, thin molecule made up of parts called nucleotides. It has a special shape called a double helix.

Although Rosalind never got proper credit during her lifetime, her invaluable contribution is acknowledged today. Her curiosity, hard work, and perseverance guided her discoveries, and nothing can ever take that away from her.