Astronomy For Kids: Know An Astronomer

Who Is Emily Levesque?

It was 1986 and Halley’s comet was making its once-in-every-75-years journey past the Earth. Two-year-old Emily was out in the backyard watching with her family. One look up at the star-studded sky and little Emily was hooked! Looking at the stars has since grown from a personal fascination into a career. That little girl is now Dr. Emily Levesque, Assistant Professor in the Astronomy Department at The University of Washington, and inspiration in astronomy for kids. Emily is renowned for her work on the deaths of big stars- stars at least 8 times as massive as our sun.

Emily likes to think of stars like people: they are born, evolve, grow old, and eventually die. And when big stars die, they explode into supernovas. Emily uses incredibly powerful telescopes to study this process, sometimes even looking billions of light-years away into galaxies far beyond our Milky Way. 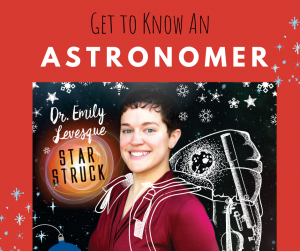 Day In The Life Of An Astronomer

So, what might an astronomer’s typical day look like? For Emily, it means a lot of time spent analyzing images from telescopes.

To understand the data in such images, she uses a lot of math and computer programming.

She teaches at the University. She also does a lot of writing – writing research papers, writing proposals for grant money to fund research, and even writing to schedule telescope time.

And while she does spend time working with telescopes, it isn’t in her lab. The powerful and super-expensive telescopes modern astronomers need for their research aren’t owned by a single scientist. Emily, and many other astronomers, need to travel to important sites to gather images a few times a year.

Before she was using big telescopes to look at even bigger stars, Emily grew up in Taunton Massachusetts.

She had some amazing and hard-working science and math teachers at her school.

But Emily was the only kid in her class who loved science and was completely obsessed with space and astronomy for kids.

She was even made fun of sometimes. But all that changed when she went for a summer camp organized by Johns Hopkins. That experience, she said, was “mind-blowing”.

Suddenly she was cool for being interested in science, and she was surrounded by other people with the same interests!  “Hanging around with peers who also liked science was wonderful,” Emily shared.

Growing up Emily enjoyed watching movies like Twister because they portrayed scientists as cool and smart.

She was particularly fascinated by the Apollo 13 mission and the amazing team who worked to bring the astronauts safely back to Earth.

Her only childhood regret? Not being able to go to space camp for learning astronomy for kids. (She thinks she can still go). 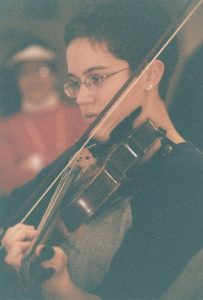 Before ending up in Washington state, Emily received her bachelor’s degree from MIT, went to Hawaii for her Ph.D., and then moved to Colorado for her post-doctoral studies.

Emily is inspired by her love of science, but it isn’t her only interest.

Emily is also a trained violinist. She started playing from age four and even performs with orchestra groups at her university today.

Learning music taught her the value of working at something, even when it can sometimes be very hard and frustrating.

She also loved theater, which helped develop the public-speaking skills she uses in classes and presentations almost every day. Today her work takes her to different parts of the world, and she loves every minute of her job.

Words of Advice
Emily wanted to share her special trick for deciding what you want to be when you grow up: Take the time to figure out why you like something. For example, Hubble’s pictures are really pretty to look at. But why do you like looking at them? Because the process of discovery fascinates you? Because you want to know what the pieces are? Or because you think stars are really cool? Finding out the answers to these kinds of questions can help you figure out what you are truly interested in.

Science is really awesome. There are so many who share your interest. You are far from alone in pursuing your dreams. So, go for it!

Encourage the future astrologers and inspire them with a subscription to Smore , to understand more about astronomy for kids.

What is a Supernova?

Stars like our sun are constantly fusing hydrogen and helium at their cores, and the energy produced from that fusion balances the gravity pressing in on the star. When a massive star dies, the fuel source at the core runs out. When that happens, gravity wins over and the whole star implodes. It takes less than a second to happen. The outer material of the star bounces off the imploded core, and that’s what we see as a supernova! Supernovas happen incredibly fast, sometimes in less than a second. But the light from the star fades over the course of a year. The last recorded supernova in our Milky Way was ~400 years ago! –